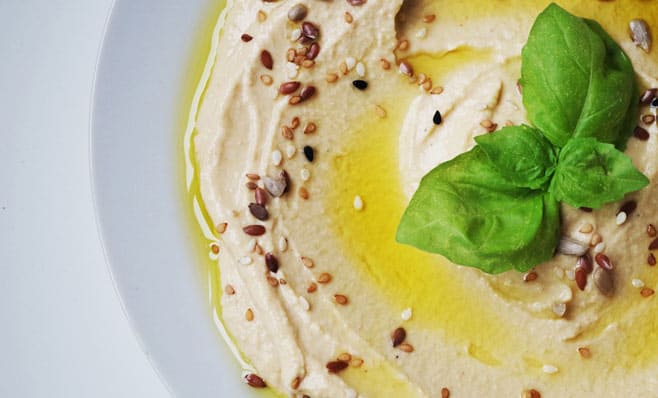 I’m a person who has been on a health journey so I can lose weight. I’ve read about hummus, and it’s health benefits for dieters and non-dieters alike.

Is hummus healthy for weight loss? Shortly saying: yes. Research shows that with moderation, hummus can be part of a healthy diet and can help with weight loss.

Consumption of hummus can be wholesome due to its vitamins and the base ingredient of chickpeas helping to improve satiety.

In 2014, a study by the Journal of Nutrition and Food Sciences confirmed that adults who regularly consume hummus are about half as likely to be obese.

The study concluded that the regular consumption of chickpeas and hummus is associated with better nutrient intake and diet quality.

It’s a fiber-rich food that consists of dietary fiber that slowly digests in your system, with a healthy amount of plant-based proteins to help you stay fuller for longer and keep your mind sharp throughout the day.

If you are worried about store-bought hummus, then you can make it yourself, so you will know exactly what is in it.

While most store-bought hummus is healthy, you may want to increase or swap out specific ingredients to improve its taste profile to your preference. For example, you can try peanut butter hummus to replace the chickpea.

Peanut butter is going to be a bit more calorie dense, so it is viable for those who need the energy source for a workout or to improve healthy fat intake.

Instead of chickpeas, you can also use pesto, which represents an Italian and Middle Eastern fusion that is unique and provides a savory snack.

Keep in mind that pita bread is typically used to eat hummus. However, pita bread can be made of common ingredients that can cause a sugar spike.

Hummus has an Arabic origin, with the word being “chickpea” in the language. Hummus was initially made from a legume. Specifically, the garbanzo bean that was boiled, mashed, then combined with herbs, sesame seeds, lemon juice, and garlic.

Hummus has been around for so long, that many cultures claim to be the home where it originated from.

The fact is that hummus has been around in so many different varieties, that pinpointing the exact location where it originated from is difficult.

Several cultures celebrate hummus, speaking stories in which hummus is described as one of the oldest known foods, with some stating that it hails back to the 12th century.

However, as you can imagine, these claims are difficult, perhaps even impossible to verify.

The earliest known recipes of hummus go back to Cairo, with a cold purée of chickpeas, vinegar, and pickled lemons and herbs were the norms.

The key ingredient that has been popularized and used with hummus in modern times is the tahini sauce — which the first reiteration of hummus did not include.

Regardless of its origins, hummus is a delicious snack that is prepared and enjoyed by millions around the world.

Chickpeas are the main ingredient in traditional and commercial hummus preparations and have health benefits from its dietary fiber, protein, manganese, and traces of B vitamins.

Hummus preparations regardless if you make it yourself or buy it made from the store will vary greatly when it comes to nutritional content.

However, expected about 100 g of hummus to be between 150 and 200 calories. Depending on the preparation, hummus can make up 10 percent of the daily value of your dietary fiber.

The Benefits of Hummus

Hummus is made from nutritiously-sound foods — chickpeas, tahini, water, spices, and herbs, with the fat content, typically coming from the tahini sauce and olive oil. Here are some health benefits associated with hummus, and why should include it in your diet.

Hummus is a viable source of plant-based protein, providing about 7.9 g per serving. This is an excellent option for those who are on a plant-based diet.

Consuming enough protein is essential for optimal production and synthesis of other nutrients.

Inflammation signals to the body that it is fighting off an infection or injury. However, that information can persist and undermined everyday activities.

This sort of chronic information has been linked to several health problems. Olive oil is one of the critical ingredients in hummus preparation, and it is known to have anti-inflammatory effects.

In particular, the virgin olive oil contains a type of antioxidant called oleocanthal. Oleocanthal is a phenolic antioxidant compound that is responsible for the mild burning sensation in the back of your throat when consuming olive oil.

It has potentially biological effects of being a potent anti-inflammatory. About 3 1/2 tablespoons of extra virgin olive oil are comparable to 1/10 of an adult ibuprofen dose.

Not only is hummus a versatile food that is enjoyed by vegetarians in non-vegetarians, but it’s also home in many specialized nutrition plans, like ketogenic diets, or diets that focus on healthy fats.

These diets also focus on the role that glycogen has not only with how individuals approach their diets but also as a method to control cravings.

Chickpeas naturally have a low glycemic index, with hummus also being a source of soluble fiber and healthy fats which slow down the digestion of carbs and allows the body to utilize it in its entirety instead of causing blood sugar spikes.

The bulk of hummus is made from chickpeas, with chickpeas having about 35 grams of dietary fiber per cup.

Satiety is the feeling of satisfaction you get after eating a meal. Foods that are high on carbs and cause quick sugar spikes will only cause you to feel hungrier earlier on.

Hummus and its dietary fiber can help you feel fuller for longer, discouraging snacking and allowing you to go longer between each meal to control your caloric intake.

With that follows a lower propensity for stroke, cancer, and death from heart disease.

B vitamins are water-soluble and play an essential function in cell metabolism. B vitamins help with nerve functions and the formation of red blood cells.

The regular consumption of B vitamin-rich foods can help ward off signs of anemia, fatigue, intestinal issues, and muscle weakness.

Manganese is essential for intracellular activities, including enzymes that help with development, antioxidant defense, and immune response — primarily, the manganese in hummus can be a powerful booster for your health.

Can You Overeat Hummus?

It’s tasty, healthy, and is full of nutrients that your body craves. However, the issue comes when you use hummus to slather it on to your favorite foods, or eating it with pita bread that is made with refined carbs.

For example, a cup of commercially prepared hummus can easily be a 400 cal snack. Eating a cup of hummus can happen if you are not paying attention.

You can help control moderation and how much hummus you eat by being aware of your eating habits.

Conscious eating — eating while being cognizant of the textures and smells of food dishes, without the television or other distractions — can help you be more aware of your satiety levels, ensuring that you did not overeat.

Consuming excess calories means that you are eating more than your body burns off within a specified period. Energy expenditure comes from body processes you do not have control over, including breathing and your heart beating.

The remainder of the energy that you use comes from activities like anaerobic and aerobic activities.

When you consume excess calories, the body stores energy as glycogen for immediate use or fat for a later time. These compounds are stored in your liver, muscles, and in your subcutaneous fat.

Fat storage around the midsection has been linked to an increase in heart disease and other ailments. Since it is located in your midsection, they can also make it difficult to exercise and fit in your clothing.

To ensure that hummus does not add to your problems, make sure that you are eating it as part of a balanced diet. Serve it with pita bread or crackers for a nutritious snack.

Continue Reading
link to Strength Training: Your Heart Health Could Depend On It?

Is Strength Training Good for Your Heart? Many individuals automatically think of cardiovascular exercises when they consider workout routines that are good for the heart. The heart-health...